We have had a fun weekend.

We are going to Strasbourg from the 3rd - 5th April to the NATO 60th Anniversary "celebrations" and we will be at the Peace camp, civil disobedience, counter summit & demonstration. The slogan is "yes, we can" reminiscent of a certain President just elected, who used it as his slogan and it is his administration who are sending another 17,000 troops to Afghanistan and have bombed Pakiatan every day since his inauguration, so I am not entirely comfortable with it, although they might come up with a perfectly reasonable explanation, I feel he just disguises it better then the previous enumbent.

So exciting times. on Saturday 8 (3 under 16) of us turned up at Museum of Science and Industry(MOSI) as the Zionist Federation are holing an Israeli Science Day and we feel that a celebration of the sort of science that has been used agains the Palestinian people in the West Bank and Gaza should not be celebrated when the schools and universities in Gaza have been destroyed. Chris and I arrived first and there were two policeman stood there and who came up and stood near us, then the others all arrived together and we were just sorting out the petition and the leafletsm when the policeman asked to see one. I showed it to him and he said fine and I asked if he wanted to see the note on the back and he said "No, I read that on the website!; followed by the Director of the Museum coming out and talking to us (bought us a coffee) and then someone came up and expressed surprise at seeing him as he doesn't work Saturdays! So a result, and they are aware there will be a demonstration on the 3rd March, which I will go to after work and Chris will be there from 2pm.

Anyway, we were buzzing a bit from that and we went off on our way home via Stockport to see a friend and go shopping. The trains are every hour so we saw ourfriend and then went off to Sainsbury's and got what we wanted (although a very funny moment when my name was announced as I had left the shopping trolley in an aisle!) and walked up to the train station. It was a bit cold on the platform and we went into the Waiting Room and were chatting and saw a train - it was ours, pulling away from the platform! So a walk up his cousin's for a cup of tea and back down to the station, where our train was delayed for 15 mins! So we finally got home at 9pm after leaving the house at 1pm

We laugh so much together and it is coming up to our first wedding anniversary (so I am hoping to buy him a guitar as he doesn't have one, the one he played on our song was borrowed) next month - a year and 17 months in total!
Posted by Unknown at 14:06 No comments:

Student Occupations - Unrest in our places of learning

Quick note about the student occupations - fantastic and most getting their demands asceded too and an article in the Independent on Sunday called "Students are revolting: The spirit of '68 is reawakening" with occupations at both Manchester Universities; Sheffield Hallam, Nottingham, Cardiff, Newcastle, Oxford, Kings College, Glasgow, Sussex, LSE and Leeds to name but a few. Whereas in 1968 the students were not paying for their University education; now they can and are demanding to see where pension funds have their money and to demand that they do not place them into firms that deal with Israel - is this as small start to the banning of Israeli goods I wonder?
When you get Gerald Kaufman Labour MP for Manchester Gorton, speaking at a benefit in Rushlome, Medical Aid for the Palestinians, you know that time and momentum is starting to move and that maybe this is like the fight against apartheid and that the conflict in the Middle East will be halted, although I don't think Israel is going to like the likely outcome!
Posted by Unknown at 15:51 No comments: 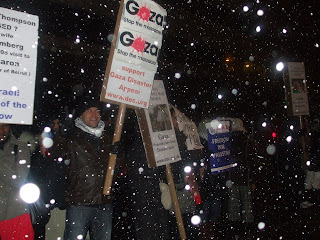 As I have previously written; Chris and I both joined Stop The War Coalition. We can see the anti-war movement growing and again today, we (well me and 5 others, as Chris is not well and we thought it unwise for him to stand in the cold) stood on Market Street for 1.5 hours asking people to sign the petition and donate to the DEC appeal. Mark Krantz (Stop The War Manchester Convenor) had done about 2000 leaflets for the BBC vigil and we must have handed out about half and we got a lot of signatures and just over £83 in donations and Mark managed to sell half the Gaza badges, so not too bad a day and although very cold - sunny day but breezy. It is supposed to sleet tomorrow - brrrrrr (amd it's 27C in Hamilton) The photo is of the BBC vigil (extreme protesting!) last Sunday in the snow - this week I came straight home, although if I can get a bus I might go up tomorrow evening for an hour. 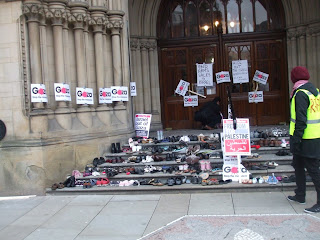 I cannot believe we are at the end of January already and that still, despite worldwide condemnation, the Israeli's continue to bomb the West Bank and Gaza. It makes me so angry that a country with Israel's history, once the abused should now perpetuate the very abuse it suffered at the hands of the Nazis in 1930's Germany and WW2.
Gaza Genocide Must Not Be Forgotten is a video done to "Run" by Snow Patrol, it is excellent and I would urge everyone to watch it. Chris and I joined "Stop The War Coalition" officially today - we have spent the last three evenings at BBC North at a vigil held each evening from 5.30-6.30pm and started as a response to the bombing of Gaza by the Israeli government and to ask for an end to the seige and opening of all gates into Gaza. This is only one of the things Greater Manchester Stop The War Coalition have done (there have been three national rallies in London, we went to 2 of them) one on the 3rd Jan, another on the 17th when Manchester had a rally and placed shoes on the steps of Manchester Town Hall to represent the lives lost in Gaza (photo above) and another on the 24th which we couldn't go to although we were at the Demo in London outside the BBC in Portland Place. The photos are here (they are on Photobucket so you may need to join to see them) and there were a small band of us outside the BBC tonight in the snow! We collected 550 signatures for a petition for the BBC to screen the DEC Appeal for Gaza and Chris will go to the Post Office tomorrow to pay in £315 we collected on Market Street for the DEC Appeal.
We are also planning on going both to the G20 on the 2nd April in London and then onto the NATO 60th Anniversary Celebrations in Strasbourg on the 4th April and attending the alternative conference on the 5th (if I can get the time off work!).
So 2009 is a month old and we have been on two National Demonstrations, one Manchester Demo and rally and three vigils!
Go to Stop The War Coaltion, register to show your support and also Manchester Stop The War
Posted by Unknown at 12:16 No comments: